Description: Cracks in masonry structures are a cause for concern as they signal a potential lack of functionality and/or aesthetics. It thus becomes important to identify the cause of damage in order to mitigate it and to prevent its occurrence in the future. Similarities in crack patterns may correlate to similarities in the damage cause. Currently, the assessment of similarities in crack patterns and their corresponding damage causes is done by masonry experts and structural engineers. This process is often expensive and subjective. The use of a Convolutional Neural Network (CNN) may offer an alternate robust and dependable means to automate the assessment of masonry crack patterns by processing their images.

An inter-rater agreement analysis is performed on the similarity assessments using the Krippendorff’s alpha measure. Additionally, the agreement of each rater with a chosen standard rater is studied using the Lin’s Concordance Correlation Coeffcient (CCC). Using the Lin’s CCC, intra-rater agreement is also assessed for the standard rater to see how consistent a rater is with their own annotations. These labelled image pairs are then used to fit and test the regression neural network to evaluate its accuracy in predicting the similarity labels. The neural network is also fitted to and tested with various combinations of labelled data to study its generalisability.

It is found that in all three sets of data, the Krippendorff’s alpha is less than 0.80 for all the labels, which indicates an insufficient agreement among the raters. It is also seen that, in general, agreement among the raters increases with their experience level, i.e. the descending order of agreement within rater group is: industry experts, PhD students, and MSc students. Studying the Lin’s CCC of each rater’s performance compared to that of the standard rater helps to choose the raters who can be considered as reliable as the standard rater. Additionally, the intra-rater agreement analysis of the chosen standard rater shows that the highest self-consistency (agreement) is achieved for the crack pattern similarity label, followed by the overall similarity label and finally the damage severity label, with corresponding Lin's CCC values of 0.96, 0.86 and 0.72, respectively.

This MSc thesis concludes that the neural network fitted to data generated from the computational physics-based approach and assessed by all the raters is able to predict the crack pattern similarity label, the damage severity label and the overall similarity label with sufficiently high degrees of accuracy. However, the generalisability experiments on the neural network shows very poor results. This indicates that in order to achieve a greater prediction accuracy, the neural network may need to be fitted to a considerably larger sample of crack patterns that covers all of the relevant situations. Furthermore, the substantial inter-rater variability in labelling of crack pattern image pairs suggests that even an ideal neural network architecture may not be able to overcome the inconsistencies in the fitting data. 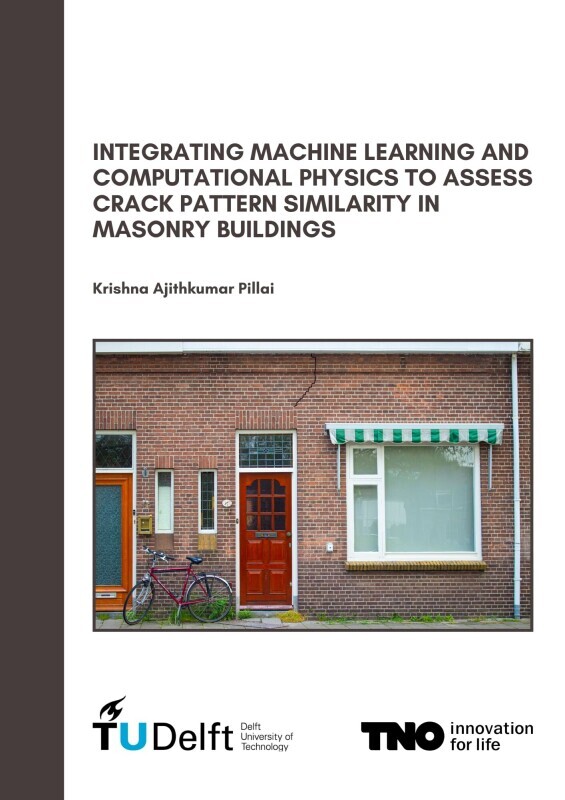