Topic: Visualisation of the airflow pattern of exhaled droplets in a classroom

Description: The airborne transmission of SARS-CoV-2 in educational buildings has raised concerns during the current COVID-19 pandemic. In this study, a portable fog generator system was designed and assembled to visualise the airflow pattern of exhaled droplets in a classroom. The system consists of five components: medium, fog generator, buffer, pump, and manikin head. The medium was made of glycol and demineralised water, which produced a fog composed of droplets. The fog was produced with the fog generator and passed through a pipe into the buffer for build-up. After accumulation, the fog is pumped through another pipe and is exhaled out of the mouth of the manikin. Experiments were conducted with the portable fog generator system in a simulated classroom under four different ventilation regimes: no ventilation, natural ventilation (open windows and door), mixing ventilation (600 m3/h), and a combination of natural + mixing ventilation. The experiments were recorded with a camera and analysed to determine the horizontal distance of the path taken by the fog and to measure the time it remained visible after exhalation from the mouth. During the experiments, it could be observed with the naked eye that the glycol droplets linger in the air longer than what was captured in the recordings. Not all the droplets were visible with the camera. The recordings showed that with open windows and door (natural ventilation), the droplets travelled the furthest distance (1.8 metres) and stayed the longest in the air, while with mixing and natural ventilation, the droplets travelled the shortest (0.5 metres) and stayed the least time in the air. These findings confirm that mechanical mixing ventilation increases the removal of aerosols in the air. It is concluded that the portable fog generator system provides a quick method in understanding the duration and distance droplets can travel after being exhaled. 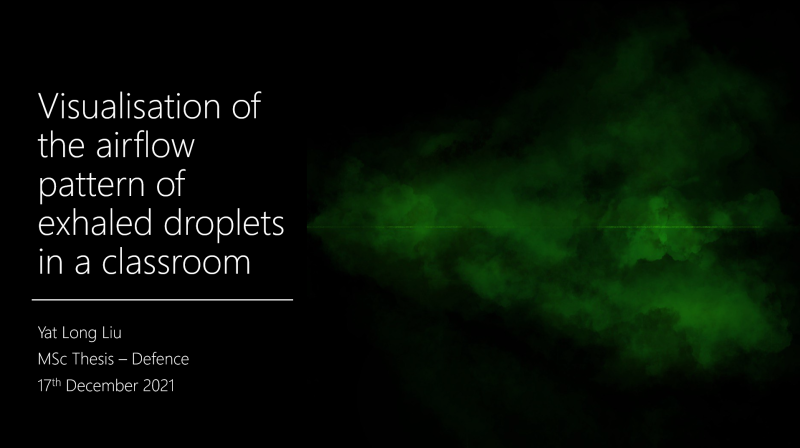